Airlines just can’t get the world flying again. Despite a U.S. boom in vaccinations, many countries are battling a resurgent coronavirus. That means carriers are now expected to end 2021 offering about two-thirds the number of seats they did in 2019. Passenger demand could be even lower.

Globally, scheduled capacity is stuck at about 58% of pre-pandemic levels, says John Grant, chief analyst at aviation data specialist OAG. For every market that grows, another seems to fall back, he said.

Using weekly OAG updates, Bloomberg has built a global flight tracker to monitor the pulse of the air travel comeback. It’s not one Grant expects to be quick. Measuring seats on offer shows that carriers currently have some 62 million seats per week, well short of the 2019 benchmark of 106 million.

While not as precise a measurement as actual passenger traffic, tracking seats offered can help identify trends, giving an early look at what’s happening on a global, regional or national level.

With lockdowns meaning hopes of a buoyant European summer season hang in the balance, Grant says the reality is that airline capacity will hit an average of about 65 to 68 million seats by the end of the year — with passenger demand lagging some 15-20 percentage points behind capacity levels “for a long period of time.”

“There maybe light at the end of the tunnel, but it’s a very, very long tunnel we’ve still got to go through.”

OAG’s data snapshot for the week of April 12 shows that the U.S. is gaining momentum, with a handful of accessible destinations in the Caribbean benefiting from a recent upturn. Besides Cancun in Mexico, airlines have been ferrying Americans to the U.S. Virgin Islands, where capacity is up 36% versus 2019, Puerto Rico, up 0.5%, and St. Vincent and the Grenadines, where last week’s volcanic eruption is likely to erase a 13% gain.

Discount carriers in the U.S. have been adding capacity as rising vaccination rates encourage leisure travel. Frontier Group Holdings Inc. and Spirit Airlines Inc. have been the most aggressive, piling on flights just before spring break — though their push has trailed off in the past week.

Despite U.S. growth, Asia leads the global pack. China is offering 5.1% more seats than during the same week in 2019. Vietnam is still closed to foreigners but domestic tourism means flight capacity is almost back up to where it was two years ago. A similar dynamic is at play in India, where seats offered are down just 16%.

In Europe, the regional hops that embody summer travel are nearly dormant, with countries like Italy, France and Germany stuck at 25% or less of pre-pandemic levels.

One surprising development is the handful of bright spots in Africa. The Democratic Republic of Congo leads the way at 41% above pre-pandemic activity. International borders have been open since August in the expansive central African country which is layered in rainforest.

War-torn Yemen in the Middle East is another outlier, with capacity offered at 19% above 2019 levels. While Yemenis are unable to fly to many countries, airlines have reintroduced routes to Sudan and Ethiopia, where getting visas is easier.

China was quick to bring Covid-19 under control, and has kept infections low. Yet while it continues to help Asian air travel outperform the rest of the world, even that is not enough to see the region restore capacity mothballed since 2019.

Asia’s comeback was briefly interrupted by the Lunar New Year break in February, when the Chinese government encouraged people not to travel, OAG’s data show. The recovery has resumed since then. though the pace has flattened in recent weeks.

North America got a bump at the start of March, driven by spring break getaways and a powerful U.S. vaccine rollout. That looks set to continue after the Centers for Disease Control and Prevention this month cleared a return to recreational travel for vaccinated individuals. Muddying the outlook is a rise in infections in the Midwest, which has sent U.S. virus cases to a two-week high.

Europe trails every other region by far. A host of factors are at play, ranging from the high reliance on international flights — which complicates border crossings — to the emergence of new virus strains and setbacks in the European Union’s vaccination drive. The U.K., which has had the most success in cutting infections, has waffled on a May 17 target date for a reopening of international air travel, but says it’s still a goal.

United Airlines Holdings Inc., whose normal route network is weighted toward international travel, remains stuck at almost 50% below normal. The Chicago-based carrier has emphasized matching capacity to demand, so that planes fly fuller. Delta Air Lines Inc., another big global carrier, will have more room for passengers on May 1, when it becomes the last U.S. airline to lift its block on selling mid-row seats.

While international travel remains suppressed, some large nations are being buoyed by domestic carriers, which have been able to keep flying where train or automobile travel is less practical. Airlines in China and India have kept accepting single-aisle jet deliveries from Airbus SE. Vietnam, about 1,000 miles from north to south, has also recovered well, with scheduled capacity down just 5.2% from 2019.

Yet Singapore and Hong Kong, both reliant on international travel, are barely flying at all. Progress toward establishing flight corridors has been waylaid by virus flareups, despite low case numbers in comparison to Western countries. In Malaysia, where capacity is 85% below 2019 levels, AirAsia Group Bhd. posted a record loss in the final quarter of 2020 after local lockdowns delayed its plan to resume limited operations.

While U.S. airlines are bringing back pilots from leave, the coming weeks will show whether March’s rebound can endure. Rising Covid-19 cases there mean the outlook for carriers is becoming less clear, according to analyst Helane Becker of Cowen & Co.

Vaccination rates will be key to lifting travel restrictions. Just this week Johnson & Johnson’s coronavirus vaccine rollout became the latest to hit obstacles, with the U.S. pausing use of the shot and its European rollout delayed after reports of rare instances of blood clotting. Questions have also been raised about the effectiveness of some of China’s vaccines.

On a more positive note, the EU on Wednesday reached agreement on a draft of technical standards for so-called vaccine passports, which promise to ease travel to and within the bloc. But it’s not clear how soon the plan will go into effect.

“It’s very difficult on a global basis to see that there are going to be enough vaccinations by the end of 2021 or indeed 2022,” said OAG’s Grant. “It almost makes air travel a luxury product once again, particularly if you need to get tested both before and after arriving back home.”

Wed Apr 14 , 2021
Once you’ve figured out the logistics to get in and get out, you will have more homework to do. Don’t expect your favorite airport restaurants or lounges to be operating normally. Before leaving home, check your airport website to see what’s open near your terminal; if your options are lacking, […] 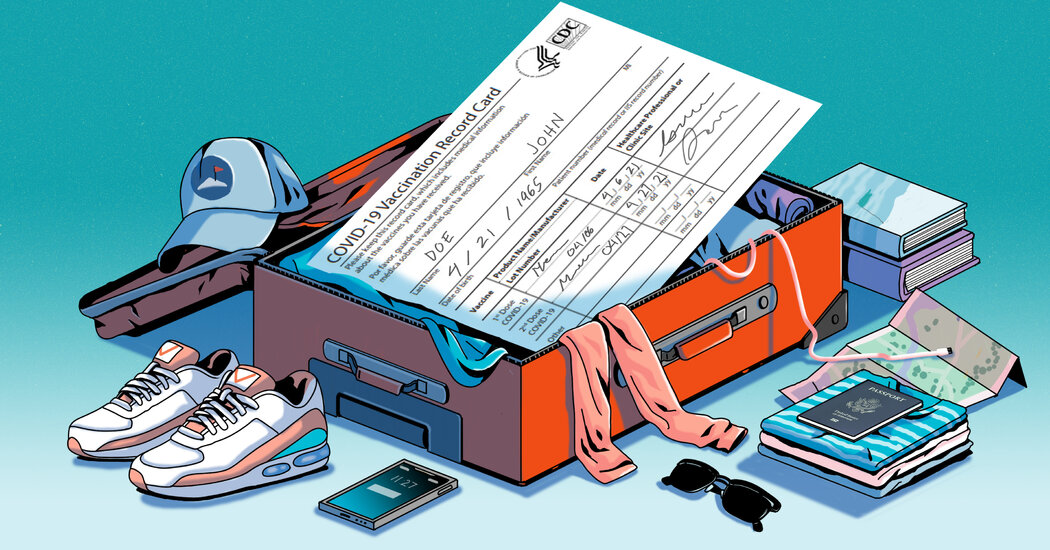