It was January 2020. My daughters and I were at the passport control counter inside the Frankfurt, Germany, airport, eager to board our flight home to the United States. Normally my husband travels with us, but this time was different: He was staying in Germany a few days longer for a work trip we had combined with a family vacation.

The unsmiling agent thumbed through our passports, peered at us and asked a question that left me dumbfounded: “Where is the father of the children?” My cheeks burning, I stammered my explanation. The agent waved us along, but I felt shaken and defensive. As a U.S. citizen, I had always traveled freely with my kids — now ages 9 and 11 — and had never been asked to explain where their other parent was. Did I look suspicious because my daughters’ eyes are blue and mine are brown? Was the agent making a judgment about my ability to parent without a husband?

I later discovered that a lot of parents traveling alone with their kids have experienced similar questioning on international trips, and many of us — even seasoned travelers — were caught off-guard by it. But you can be prepared for any questioning and now would be a good time to start gathering the documentation you’ll need and researching identification requirements at potential destinations.

Understand safety is the goal

Solo parents aren’t the only travelers noticing increased scrutiny. “All border crossings have become more difficult over the past few years,” says Erin Barbato, a clinical professor and director of the Immigrant Justice Clinic at the University of Wisconsin Law School. From political unrest to the global pandemic, different forces have added complexity to international travel. In this environment, we need to expect that agents may ask more questions, Barbato says.

While border security has become more intense in general, adults traveling alone with children face extra questioning for a specific reason: to make sure kids are safe. “The number of children internationally trafficked every year is pretty astounding,” Barbato says. In 2016, 10 million children under age 18 were victims of forced labor or forced marriage, according to the International Labor Organization (ILO) and Walk Free Foundation. Children are also at risk in households with severe marital discord. International parental kidnapping occurs when a parent takes a child to a different country in violation of another parent’s custodial rights. The U.S. Department of State reports that 485 such cases were opened in 2019.

Get the right documentation

My kids and I had U.S. passports for our Germany trip, and I assumed they were all we needed. But in hindsight, I had no documents proving I was my children’s mother — and I could have been detained for a secondary inspection if the agent had concerns about my credibility.

You can obtain or make copies of documents that will lower the likelihood of problems. Both Barbato and U.S. Customs and Border Protection recommend that solo parents always carry a letter — preferably notarized and updated annually — communicating the other parent’s consent to travel with the children. Birth certificates or adoption records are also a good idea.

If a mother has changed her surname following a child’s birth or adoption, it’s important to bring that supporting documentation as well. If no other parent is legally involved, the traveling adult should pack relevant paperwork such as sole legal custody documentation, a death certificate or the birth certificate listing only one parent.

It’s best to have certified copies of all of the above, as well as electronic versions of your documents, and to pack extra copies in different suitcases.

Barbato counsels that questioning can be more intense for parents whose surname or skin color is different from their children’s. Lucy Jordan, a British writer living in Brazil with her family, experienced this firsthand. Jordan kept her birth name after getting married; her children have her husband’s last name. In 2016, Jordan was traveling alone with her infant son on the Eurostar train from Paris to London. Like me, she had packed passports but no other documentation.

A border agent inspected the passports, immediately noticed the different surnames, and asked how Jordan could prove she was the mother. Stunned, Jordan said, “I could breastfeed him for you if you want.”

The agent continued to question her but stopped when Jordan suggested calling the American Embassy in Paris, where her husband was then stationed as a diplomat. “If I hadn’t had that backup, I don’t know if they would have let me through,” Jordan says.

Jordan prepares a bit differently these days for solo travel with her son, now 5, and 2-year-old daughter by carrying passports, birth certificates and a letter of consent from her spouse. Border agents still question her, but the encounters go smoothly.

Because every country has different laws and guidelines for children traveling internationally, “parents really need to do their research and make sure they review the policies for each specific country they’ll be traveling to,” Barbato says. There’s no central place to find this information, so expect to do a little digging online.

Barbato recommends making sure a friend or family member you’re not traveling with knows your itinerary and when you’re expected to arrive at your destination. Ask your contact to be available via phone during your travel day.

Talk with kids in advance

Children old enough to carry on a conversation may be surprised when agents ask them questions. On another overseas trip, my normally talkative tween suddenly became shy when an officer asked who her parents were.

“You can explain to your kids why questioning might happen,” Barbato says. “The officers are just doing their job to make sure that every child is safe in the world.” Let your kids know it’s okay to say whom they’re traveling with, and that agents may ask where the other parent is.

MacKenzie Passegger is an American citizen living in Austria, where she is married to an Austrian and works as a social media manager. A few times per year, Passegger flies home to the United States with her children while her husband remains behind for work. Passegger has learned to expect a lot of questions from airport passport agents who sometimes want to speak with her preschooler as well. She prepares her daughter by telling her, “They’re probably going to ask where your dad is. Do you know where he’s at?”

Help kids understand that the passport counter isn’t the place to goof around — there will be plenty of time for that later on the trip. Remind children that it’s important to answer to their names if agents ask.

It’s natural to feel startled, nervous and irritated when a uniformed stranger questions your family relationships — especially before or after a lengthy overseas trip. But you’ll stay calmer if you know you have the right documents easily at hand and if you keep in mind that such measures aren’t meant to judge or disparage you.

Passegger has found that her experiences go more smoothly when she makes eye contact and offers answers to potential questions — like where her family will be traveling and for how long — before agents ask.

“Traveling with kids is stressful. You’re already on edge,” Passegger says. “But it’s really important just to stay calm when agents ask you a question that catches you off-guard.”

Potential travelers should take local and national public health directives regarding the pandemic into consideration before planning any trips. Travel health notice information can be found on the Centers for Disease Control and Prevention’s interactive map showing travel recommendations by destination and the CDC’s travel health notice webpage.

Can You Stay At The 'Bachelor' Nemacolin Resort? It's A Post-Pandemic Dream

Fri Feb 5 , 2021
As much as you loved the Bachelor Mansion and its romantic vibes over the years, you have your heart eyes set on the Pennsylvania resort where Matt James’ season of The Bachelor takes place. Nemacolin is not your average destination. It’s a breathtaking resort that feels like an enchanting castle […] 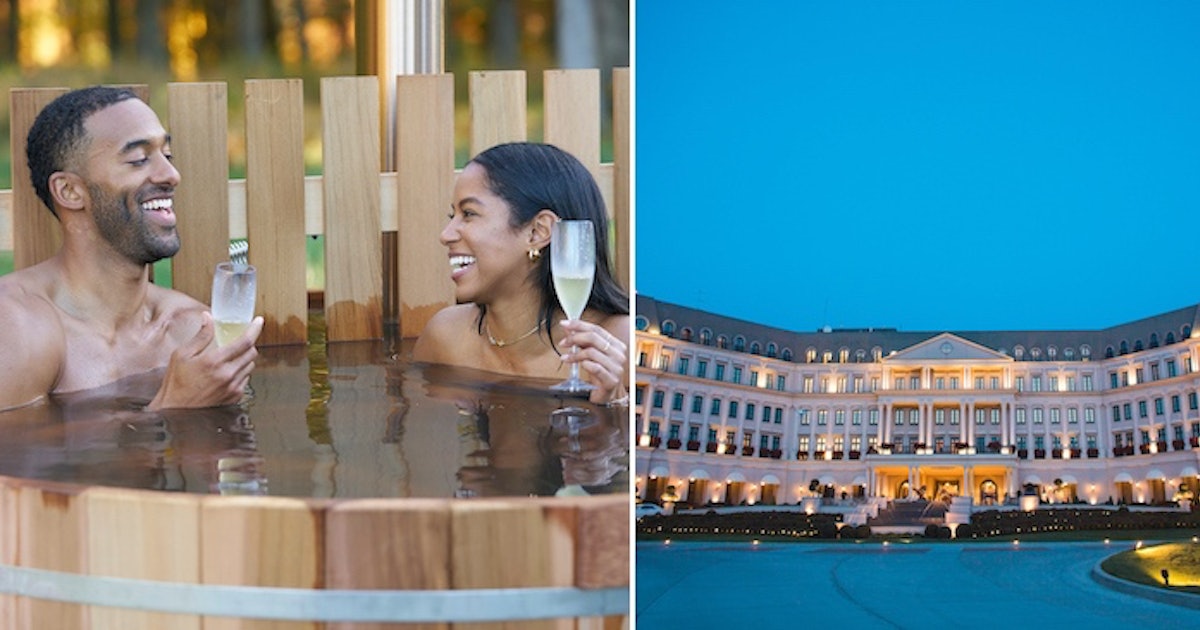